Not A 10th Century Scandinavian Helmet

The helmet is was believed to be a 10th century Norse helmet nearly identical to one preserved in the Museum of the City of Kiev. It is in fact a circa 1945 German Luftwaffe helmet. It is model number SSK90 and was produced by Siemens. This sort of helmet was used by late war Geman Jet piolots. The Messerschmidt ME262 was the first viable jet plate used in World War II. Luftwaffe pilots wore helmets of this sort, which would originally have been covered in leather.

The pictures are all clickable for huge enlargements.

Five views of the Strong helmet

The Kiev helmet for comparrison (Figure 563 from Tweedle) 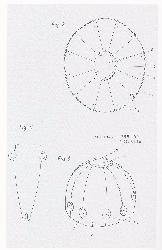 The original design plans from the Patent Office. 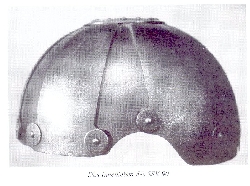 The helmet liner without the leather covering. 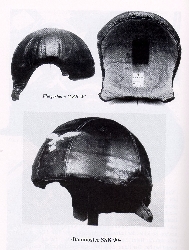 The helmet with the original leather covering.

Purchased from a dealer in military uniforms who had no information whatsoever on the piece. He purchased it several years ago from an estate in Sweden. I subsequently found a matching helmet published by Dominic Tweedle, in his book The Anglian Helmet from Coppergate (Published 1992 for the York Archaeological Trust by the Council for British Archaeology.) The sum total of what he said was:

"there is one helmet... (unpublished, Museum of the City of Kiev) of this general type from Kiev Ukraine, for which a Viking Origin can be suggested" (p. 1083)

"A complete 10th century helmet from Kiev, with a rounded cap of the crested type, may also be of Scandinavian origin; it does not resemble other helmets in use in the region in that period. (p. 1125)"

"The impression given by the Gjermundbu helmet and related fragments is that although they are in the same tradition as the Vendel period helmets, both form and constructional methods have been simplified. In particular, the construction of the cap has been modified by the addition of a central circular plate linking the major structural elements. This feature occurs also on the intact helmet from Kiev (Figs. 563-4), which is made of subtriangular plates meeting at the apex where each is fixed by a single rivet to two oval plates, one inside and one outside the cap. At the lower ends every alternate subtriangular plate has a bulbous extension to each side with a rivet passing through it, fixing the plate to its neighbors. Unlike the Gjermundbu helmet, the Kiev helmet does not even have small concavities in the edge as part of the eyeholes, and there is no evidence for attached facial protection. The only concavities in the cap edge are for the ears. There was apparently no protection for the neck. The lack of facial and neck protection suggests that the helmet was worn over a leather or even mail garment which would have provided this protection." (pp. 1127-8)

Slightly distorted from original oval form. Two holes rusted through the skull. There is some substantial pitting and rust.

This was once believed to be the most complete surviving helmet from the Viking period. There are several substantially complete pre-Viking helmets from the Graves at Vendel, Valsgarde and Ultuna. As far as truly Viking helmets we are back down to a single example. The Gjermundbu helmet is highly fragmentary being only slightly more than one quarter of a complete helmet.